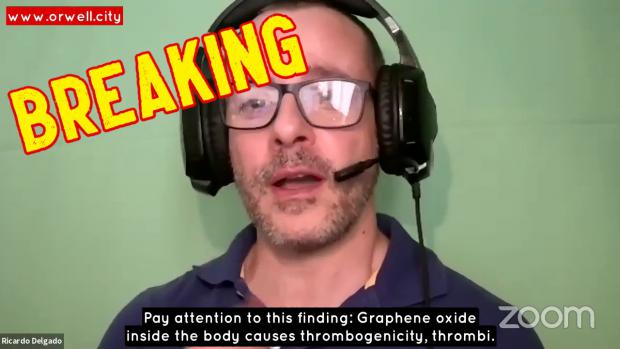 Many are already aware of the work that the team of Spanish researchers that make up La Quinta Columna have been doing.

They are the ones who have had the courage to get a vial of vaccination and send it for analysis to a renowned Spanish university through Prof. Dr. Pablo Campra Madrid, who is compiling and officializing the results in a report that promises to be more conclusive than the preliminary one he prepared for the general public early last week.

However, there are people who still do not know about La Quinta Columna. If you are one of those, then the following video is especially for you. Orwell City has transcribed, translated, subtitled and edited the video to keep its message going around the world.

Ricardo Delgado, founder and director of La Quinta Columna participated with his research partner, Dr. José Luis Sevillano, in the XXVIII Humanitarian Conference organized by the World Coalition for Health and Life (COMUSAV) and the United Nations Council for Life and Truth (CONUVIVE).

"La Quinta Columna wants to make it clear from the beginning that we have the obligation, we have the obligation to be united because we are in the same battle to give the best of ourselves, because what is at stake is precisely the future of all species. Depending on the strength and momentum that we put into this task will depend on the future of all humanity. We are right now at the turning point from which things can begin to change, and in this sense La Quinta Columna is going to summarize what has been the result of its research during this year and a half, but above all and especially during the last two months. And why during the last two months? I always remember Dr. José Luis Sevillano's words since the two of us work as a binomial and he has been accompanying me in La Quinta Columna. He said that when the vaccination started we were going to really see what he was doing and what material could be in there.

Then we realized that there was a new phenomenon that for a while we tried to deny, although today it's evident because of the millions of videos on social media, and we have been able to even measure it with devices: teslameters, magnetometers, etc. I am referring to the magnetic or pseudo-magnetic phenomenon that people acquire after inoculation. A magnetic phenomenon on the one hand, but also one that turns inoculated people into superconductors and also stores energy that can be measured with a multimeter in certain parts, such as the forehead, for example.

So from there we started to look for what kind of materials or, better said, nanomaterials can cause those kinds of properties inside the body and we came up with some of the candidates. One of them initially was graphene. Graphene inside the body acquires magnetic properties and is a superconductor. It serves for energy storage and condensation and was a strong candidate. Without yet having any knowledge of what was inside the vial, we realized that the industry or rather the stock market of the graphene industry had high uptrend peaks just as the COVID-19 vaccination campaign was starting at the beginning of the year, late December and early January. But also, quite curious, during the flu vaccination campaign.

When we have seen the possibilities that graphene has, or rather, that graphene oxide nanoparticles have inside the body when it comes to neuromodulation and when it comes to picking up neuronal electrophysiological effects for brain mapping, we have realized the possibility that graphene is being injected. Can graphene be injected? Yes. Graphene can be injected. And, in fact, some scientific papers have already raised the possibility that it could be used as a nanoadjuvant in vaccines. With that hypothesis of suspicion, we did what anyone could have done and what I also recommend that you can do if you have access to a vial.

We had access to a sealed vial from Pfizer, and by means of a request for services to a university, specifically in my name, it was sent for an analysis of the vial, where we were looking for the material in question: graphene. After some time of investigation by Dr. Pablo Campra Madrid, Doctor in Chemical Sciences, Bachelor in Biological Sciences and member of the University of Almeria, we obtained this preliminary report where we are told that there is indeed solid evidence of graphene oxide in the sample and that it is also the main component of what they wrongly called a vaccine.

From here and with this solid evidence, which will be further complemented with other spectroscopy techniques that can be done. Those that have been used are transmission electron microscopy; EMF techniques, also, optical microscopy; and ultraviolet radiation spectroscopy, which coincide with the peak wavelength of graphene oxide. From here we began to study the toxicity or cytotoxicity that graphene oxide has on the body.

In short, graphene oxide behaves exactly like the supposed SARS-CoV-2 of the official version, generating the same symptomatology of severe COVID-19. When installed at the neuronal level, it causes neurodegeneration or, in other words, neurological COVID-19.

So, from here we started to see what possible compounds, drugs and treatments could degrade graphene oxide. And look what we found: N-acetylcysteine or glutathione administered degrade it. Because what glutathione does is counteract free radicals and oxidants, all the toxins that can enter the body.

And we discovered that there were about 300 clinical studies where certain hospitals and certain universities were using N-acetylcysteine with incredible results. For example,100 patients with saturation levels below 50% practically dead —bluntly speaking—, with bilateral pneumonias, within an hour of intravenous glutathione or N-acetylcysteine administration they made it. They were taken off ventilators and everything.

We now fully understand why those treatments worked: because they addressed all the symptoms of the disease supposedly caused by SARS-CoV-2. Given that to date there is no scientific evidence of an actual sequencing and isolation of SARS-CoV-2, we suspect with many credible indications that COVID-19 disease is actually the side effect of the introduction of graphene oxide into the body by different ways.

We know that, naturally, graphene oxide is eliminated by the levels of glutathione in the body, and that is why we suspect that they propose a second, third and even fourth dose every so often: so that you have your considerable dose of graphene oxide. In short, we are talking about the simultaneous and gradual mass poisoning of the entire world population.

Think, if the preliminary report of a professor of a public university in Almeria —and I know that the same study is being done in other European and some Latin American universities—, if it determined that there is graphene oxide in the vials, how is it possible that graphene oxide is injected if the masks were removed because it caused pulmonary affections because of this nanoparticle? We are talking about a crime against humanity with the complicity of governments or at least their participation.

Everything that we have subsequently studied only further increases and corroborates the hypothesis that the supposed SARS-CoV-2 of the official version is precisely the graphene oxide. And that all the elements of protection, of supposed protection, that we have been given: masks, PCR tests, swabs, antigen tests and vaccine —the wrongly called vaccine— are precisely all those elements that will potentially cause the disease to develop in the future.

And why do I say 'in the future'? When we studied the electromagnetic phenomenon we realized that graphene oxide has what is called an 'electronic absorption band'. The electronic excitation, its magnetic resonance is precisely in the third bandwidth of the 5G technology, the one that is being tendered right now and that, remember, has been with us throughout the pandemic.

As absolutely everything started we have had three 'nets': The first is that 5G terrestrial antenna that never stopped being placed —because only the antenna operators worked— and that curiously 8 out of 10 of these antennas are placed near geriatrics and nursing homes, in their immediate vicinity, which has been precisely the most affected population. Another inner net: precisely of graphene, according to the preliminary report of the vial of this university. And an external net, which is the one used by space satellites to supposedly provide 5G coverage.

Incredibly, we are narrating a science fiction movie, but believe me, today nanoscience, neuroscience and biotechnology have advanced tremendously. We have only made an approximation in the realm of science and behind the back of civil society. Can a person be controlled or neurocontrolled remotely wirelessly? Yes, it can be done and it is probably being done in a disguised way, and that may explain some of the anomalous behavioral behavior of the population, especially those who have been inoculated or who have received doses of graphene oxide by different ways. As I say, I know I am drawing a science fiction movie, but at the heights we are at it can be difficult to really believe in something. In this sense we say that COVID-19 is only the collateral effect of the introduction of that nanocomposite by different ways, and we suspect that it was introduced in the 2019 anti-flu campaign.

As I was saying, graphene oxide has an absorption band from which it oxidizes much more quicklywhen a small button is turned on to provide 5G coverage or to perform a technological test. Do you think it is a coincidence that Wuhan —where the pangolin and bat soup came from as distraction elements— is the first city in the world with the 5G technology trial at the end of November 2019 and that all previous flu vaccination probably with graphene oxide started from there? When excited, graphene oxide multiplies frequencies. With a minimum signal, it oxidizes much faster and breaks the balance between glutathione levels and the toxicity of the organism, generating bilateral pneumonia, altering the behavior of the immune system, which cannot cope as soon as the neutrophils try to phagocytize it as if it were a pathogen, as if it were SARS-CoV-2.

We shared an article today, if I can screen share I'm going to try to do that, can you let me know if you're seeing it on screen? Well, let's see: 'Graphene oxide is detected in the body by specialized cells (neutrophils) of the immune system.' Just as if it were a pathogen. The body, the immune system, doesn't care if there is a biological agent because this never behaved like a biological agent. There are incubation periods if biological. It is not possible that in residences in our country in Spain, such as Matacaz in Barcelona, half of a residence died in 4 hours. If it is a biological agent, it does not cause bilateral pneumonia, but rather asymmetric pneumonia: they usually enter through the right lung due to symmetry. But half of a residence that had previously been vaccinated against influenza could not die. 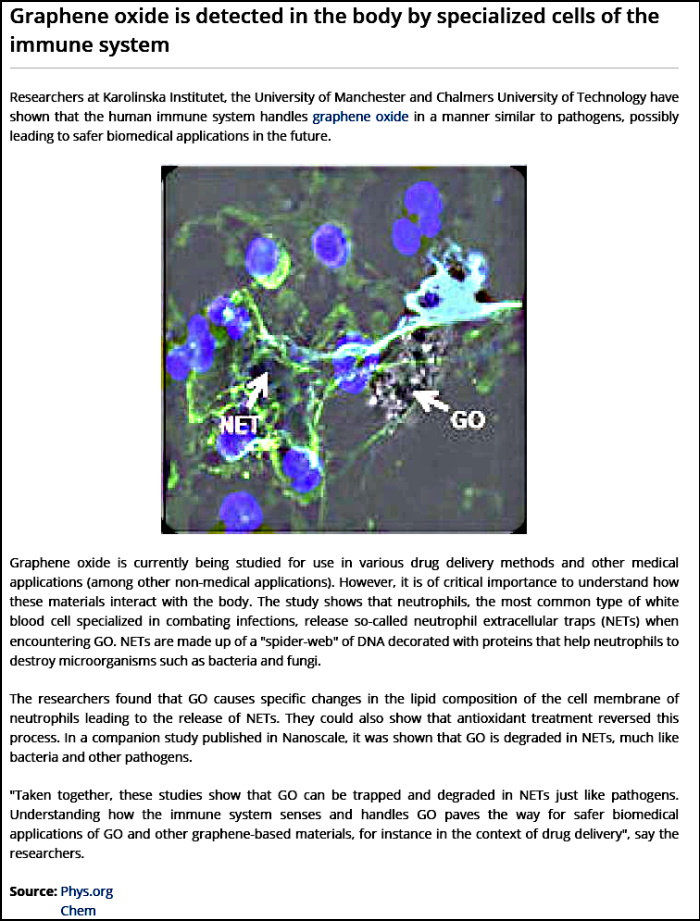