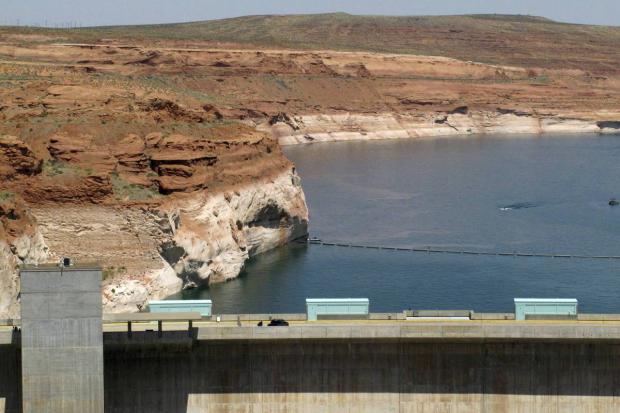 Water levels in Lake Powell are at record lows. If levels drop much further, hydroelectric turbines will cease to run.

The lake supplies water to 30 million people and irrigation of 5 million acres.

The Bureau of Reclamation began emergency water releases from reservoirs upstream in the Colorado River this week in an effort to keep Lake Powell, the country's second-largest reservoir, full enough to continue to generate hydroelectric power.

The reservoir is projected to hit a critical new low of (1,075 meters) by April 2022, just 25 feet (7.6 meters) above the level at which hydropower can no longer be generated. The Bureau of Reclamation said the emergency releases from reservoirs upstream—which includes the Flaming Gorge Reservoir in Wyoming, the Blue Mesa Reservoir in Colorado, and the Navajo Reservoir in New Mexico—will continue until December and could last into next year.

The low water levels in Lake Powell aren't just a problem for the industries and cities that rely on the water in the reservoir. It's also an issue for the Glen Canyon Dam, a 1,320-megawatt hydroelectric power plant that produces electricity distributed to customers in seven different states. The Bureau of Reclamation said the releases from Flaming Gorge, which will start this month, will increase the water level 50 cubic feet (1.4 cubic meters) per second every day, and will last until July 23.