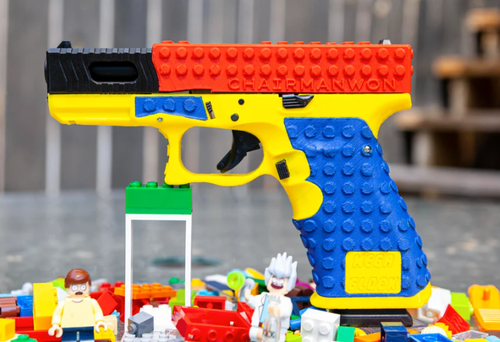 It was also noted that "once the 3D-printing community" develops computer-aided design kits for Lego guns that anyone can print at home, then "there's no way to stop it."

While Utah-based Culper Precision's "Block 19" Lego handgun has been pulled off shelves, we predicted that the 3D-printing community would begin printing their own Lego guns.

Come to find out Saturday, that's precisely what Redditor "chairmanjuan" on "r/guns" has done.

Called the "MEGA GLOCK," chairmanjuan posted a picture of what appears to be a Glock 19. They said, "MEGA GLOCK 19X, my 3d printed knockoff of Culper Precision's BLOCK 19 they got in trouble for. The slide cover only works for RMR cut slides, it screws into the optic mounting holes so it doesn't fly off into your face."

Another Redditor said, "I think anybody oughta be able to do whatever they wanna do. F**k seatbelts, for instance. Cocaine's bad for you but whatever, go ahead." The person was referring to the Lego company shooting down Culper Precision's Block 19.

Chairmanjuan appears to have released files for the 3-D printed Lego Glock.

They 3D-print a home in 24h. Now want to custom-print yours