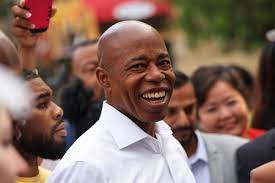 ...after appealing to what passes for the political center in that bleak Marxist outpost, and promising "to strike the right balance between fighting crime and ending racial injustice in policing".

We've seen and heard (and smelled) it all before. Adams, in case you hadn't heard it yet, is an ex-cop struggling to drag Democrat gun control theory backward into the mid-1960s, to the benighted era of the late Senator Howard M. Metzenbaum (I called him "Slaughterbush" in one of my novels, I forget which), when the expression "Saturday Night Special was a cowardly abbreviation for a phrase it's probably illegal even to think today on either coast. What's missing are two words indicating a portion of the city inhabited mostly by one race of human beings in particular.

The result of constant liberal haranguing on the gun subject was years of astonishing technical progress, dodging around idiotic laws, and of solid historical and sociological scholarship, ultimately culminating in books like John Lott's monumental More Guns, Less Crime, the title of which says it all. Today, the left's real problem is that very few crimes are ever committed with their current object of obsession, the fraudulently-named "assault rifle". A temporary ban imposed on guns like that for ten years by the Clinton Administration failed to produce any discernable change in crime rates before it expired.