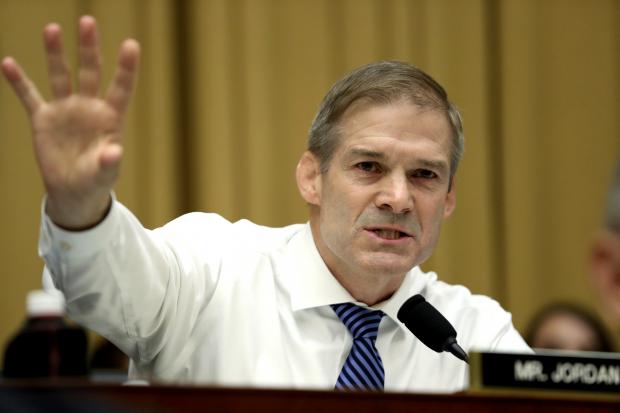 Jordan's Democratic challenger, Jeff Sites, tweeted Monday night, 'We can't let Jim Jordan and the seditionists turn this into a circus,' after Jordan referred to the panel as 'impeachment round three.'

Scott Dworkin, the founder of the Democratic Coalition, tweeted at the news of Jordan's selection, 'No f-ing way.'

Pelosi told reporters before lunchtime Tuesday that no decisions have been made yet, a statement confirmed to DailyMail.com by her office.

On Monday night McCarthy named five members of his party, including Jordan, to serve on the House's select committee, which will probe the January 6 riot at the Capitol Building.

Jordan, who also vocally defended Trump during the ex-president's first impeachment, told CNN following his name being put forward, 'You know what this is about? This is about going after President Trump.'

Banks, who will serve as the GOP's ranking member on the committee, says he will 'force the Democrats and the media to answer questions so far ignored.'

'Among them, why was the Capitol unprepared and vulnerable to attack on January 6?' Banks said.

Democratic leaders had originally proposed a 9/11-style bipartisan commission, but the bill died in the Senate once Senate Minority Leader Mitch McConnell announced he would not support it.

Republicans wanted the commission to have a larger scope - and not just study what happened on January 6, but other acts of so-called 'political violence' including last summer's Black Lives Matter protests.