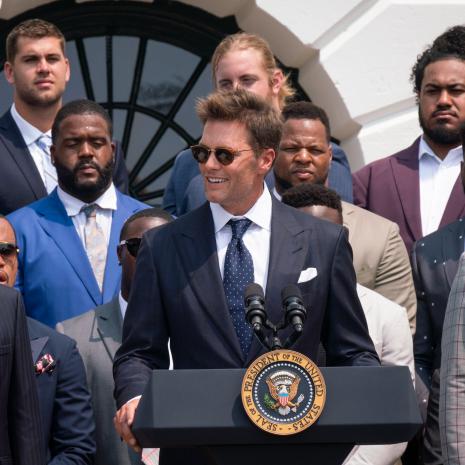 'It didn't look great there at one point, seven and five struggling a little bit,' said Brady as he recalled his team's modest start to the 2020 season.

'But we found our rhythm got on a roll. Not a lot of people think that we could have won.'

A beaming Biden responded: 'I understand that.'

This is the first time an NFL team has visited the White House to mark a Super Bowl victory since 2017, and the first time in 16 years Brady jointed his teammates for the event.

Despite winning the Super Bowl twice, owner Bryan Glazer said this was the first time the Buccaneers were able to be hosted at the White House because 'world events' in 2003 - the onset of the Iraq War - prevented it.

But he was happy to poke fun at the previous resident of the White House - and himself, describing how he was ridiculed for making a mistake during a game in Chicago.