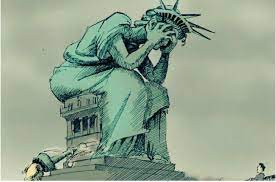 History has a funny way of circling back on itself.

The facts, figures, faces and technology may change from era to era, but the dangers remain the same.

This year is no different, whatever the politicians and talking heads may say to the contrary.

Sure, there's a new guy in charge, but for the most part, we're still recycling the same news stories that have kept us with one eye warily glued to the news for the past 100-odd years: War. Corruption. Brutality. Economic instability. Partisan politics. Militarism. Disease. Hunger. Greed. Violence. Poverty. Ignorance. Hatred.

The more things change, the more they stay the same.

Brush up on your history, and you'll find that we've been stuck on repeat for some time now.

Go far enough afield, and you'll find aspects of our troubled history mirrored in the totalitarianism of Nazi Germany, in the fascism of Mussolini's Italy, and further back in the militarism of the Roman Empire.

If I Ran The Circus

Whitehead's 'State Of The Nation': Still Divided, Enslaved, & Locked Down