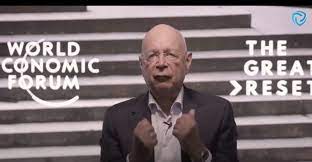 There are two men named Klaus Schwab, no doubt.

One man named Klaus Schwab is seen by the true-believers, fachidiots, the liberal intelligentsia, the institutionally refined population, as a man who deeply cares about humanity. It seems they believe his warnings to be earnest even if uncannily and strikingly prescient. The World Economic Forum after all, must have been established out of great concern for humanity since it is propped up chiefly by the most humane institution in human history, the International Monetary Fund. This Klaus Schwab is a humanist.

So perhaps this is precisely the case for the true-believers; those who accept at face value the new Schwabian 'distinction' we are asked to appreciate between a shareholder capitalism and a capitalism 2.0, a stakeholder capitalism.

Then there is a second man named Klaus Schwab, who is seen by the rest of the world and the thinking people within it, for the monster that he is. A grimacing Klaus Schwab who appears on smartphone and tablet screens to warn of impending doom, no going back to normal, new pandemics which will strike very soon, and a wave of cyber-attacks. This Klaus Schwab is a terrorist at large, a character who like Dr. Fauci and Bill Gates appear like a central casting dispatch of Bond villains.