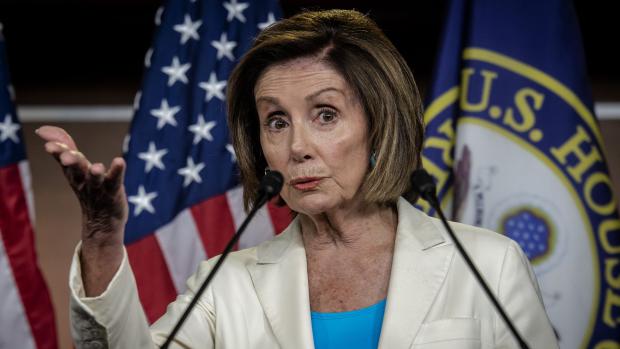 House Speaker Nancy Pelosi on Thursday defended her decision to reject two Republicans nominated for the Capitol riot committee, saying their 'antics' were in danger of getting in the way of finding the truth behind what happened on Jan. 6.

But, during her weekly news conference, she said the pair had a history of making statements that would have made it impossible for them to display 'balanced judgment,' including blaming the Biden administration for events that unfolded before it had even formed.

'To that end, it is my responsibility as Speaker of the House, to make sure we get to the truth on this, and we will not let their antics, stand in the way of that,' she said.

The panel is due to hold its first hearing next week into violence that left five people dead after supporters of former President Trump stormed the U.S. Congress.

It will hear from law enforcement officers who battled protesters.

Under the terms of the select committee, Pelosi was able to name eight members and Republican leader Kevin McCarthy had five picks.

Pelosi accepted three of the Republican nominations but rejected Jordan and Banks.

The two Republicans are outspoken allies of former President Trump, leading to accusations that Pelosi was embarked on a witch hunt. McCarthy then withdrew all five of his nominations.

He expressed his outrage during a Thursday news conference. He questioned why Pelosi would object to Afghanistan veteran Banks but not Democratic Rep. Benny Thompson who dropped a lawsuit against Trump over the Jan. 6 riot in order to take up the committee's chairmanship.

REVEALED: Congress 'Squad' members legislating to defund the police have spent up to $70,000