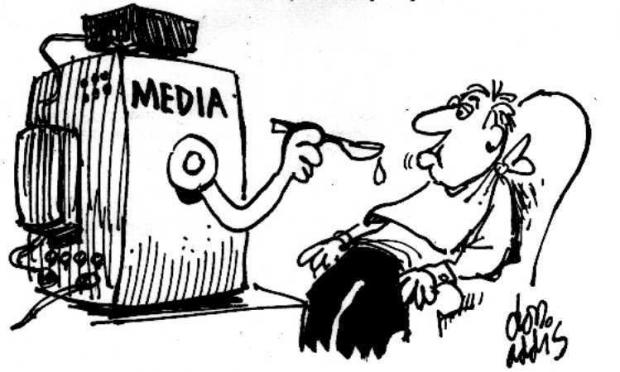 Decades before the electronic media giants rose to their dizzying heights of power and began canceling those whom they decided to bully, a man named Leopold Tyrmand, the future founder of Chronicles magazine, exposed the false self-image of the media as they claimed to defend our freedoms, when they were really aiming for absolute social control. Today, Tyrmand's remarks in his widely noted American Scholar essay, "The Media Shangri-la: Where Everyone is Free, but some are Freer," stand out as masterful satirical commentary conveying self-evident criticisms.

Taking his title from the Himalayan utopia depicted in James Hilton's bestselling novel Lost Horizon, the name for this imaginary place eventually came to denote a secure and serene environment, which, according to Tyrmand, is what the media oligarchs presently enjoy.

Leopold Tyrmand was a renowned satirist, novelist, and outspoken anti-Communist in Poland until he emigrated to the U.S. in 1966. Settling in this country, he continued to write and publish in the Polish language, his works a valued form of underground literature in Communist Poland. "The Media Shangri-la," in which Tyrmand unloads on the mendacity and hypocrisy of the American media of 1975, shows that he was able to write just as arrestingly in English as in his native tongue.

Although familiar with his subject, Tyrmand's essay on the media deliberately gives the impression of one who is an outsider looking in on a ridiculous spectacle. It is an enterprise, we are told, in which "disruptive triviality became natural or social process, gawky permissiveness became nonconformity, vulgarity became health, faddishness humanism, exploitative smartness revolutionary change." He further notes:

With a power to create something out of nothing, the media began, not long ago, to forge their own image—that of a weak, harassed entity whose performance of lawful service to the public is endangered by a brutal, omnipresent government. Exactly the opposite is true.