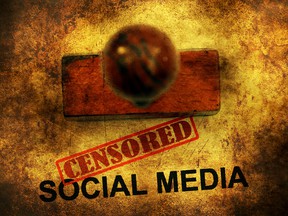 He has targeted Twitter and Facebook, whose media platforms he had used with spectacular success before and during his presidency to advance his ideas and to attack his opponents.

Trump perfected the art of communicating directly with the American public, and thereby avoiding the mainstream media, as his principal means of reaching voters. When Twitter and Facebook denied him access earlier this year, he began a digital platform of his own. When that failed to catch on, he sued those who denied him access to theirs.

The theory of his litigation is that "the internet is the new public square." Thus, he argues, all forms of speech should not only be tolerated on the internet, but the courts — the judicial branch of the government — should compel the owners of internet platforms to carry speech that they hate or fear. Can the courts do that?

The First Amendment prohibits the government from infringing upon the freedom of speech and of the press. The principles underlying these prohibitions are that the freedom of speech is a natural right that stems from our humanity, freedom of the press is an extension of free speech, and we are free to employ both as we see fit. The government does not grant these freedoms; the Constitution prohibits it from interfering with them.

Thus, we may think as we wish, say what we think and publish what we say. In terms of speaking and publishing opinions about the government, there is almost literally no limit.

The Supreme Court has ruled many times that caustic, robust, wide, open, even incendiary speech is a predicate to making free political choices in a free society.

The corollary to the freedom of speech is the right to remain silent. Thus, the courts have held that the same First Amendment that keeps the government at bay when you are saying whatever you want to say about it also prohibits the government from compelling you to speak.