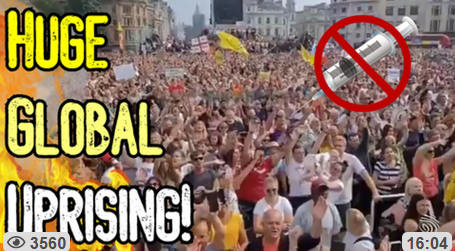 Josh Sigurdson reports on the massive uprising we are witnessing in countries throughout the world as people say no to jab passports and insane totalitarianism.

As Britain, Australia, Italy, France & Greece tell people they need a jab passport in order to go to restaurants, bars, shops, public transit, gatherings, tourist attractions and more, or just to have a job in general, people are rising up across the board. With Gareth Icke speaking in Britain, thousands rushed the streets of Turin, Italy. Meanwhile, every major city in Australia saw massive marches. From Victoria to Sydney. From Melbourne to Perth. The uprising is happening!

France was forced to postpone their attempt at making everyone get a jab passport. Greece continues to see large gatherings. This cannot end or else WE all end in technocratic enslavement.

In this video we break down the importance of disobedience as the world says no to tyranny.

VACCINE REBELLION: Growing number of US states are refusing to go along...

Firefighters, emergency medical workers and police stood for one hour in silence