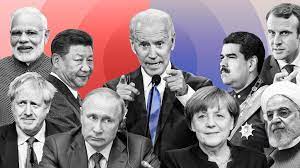 Indeed, the rulers of the corrupt Globalist American Empire (GAE) have consolidated power to such a degree that they have little need left for even the pretense that the United States is a free country. That America's corrupt ruling class are not even bothering to pretend like America is a free society anymore not only has dramatic consequences domestically, it has equally important implications globally. Accordingly, foreign governments have taken notice of the American ruling class' dramatic arrogation of power in the wake of the events of January 6th.

The Polish prime minister came out with a forceful condemnation of the American censorship regime, coupled with support of a law that would make it illegal for social media companies to censor unlawful speech:

Polish government officials have denounced the deactivation of Donald Trump's social media accounts, and said a draft law being readied in Poland will make it illegal for tech companies to take similar actions there.

"Algorithms or the owners of corporate giants should not decide which views are right and which are not," wrote the prime minister, Mateusz Morawiecki, on Facebook earlier this week, without directly mentioning Trump. "There can be no consent to censorship."