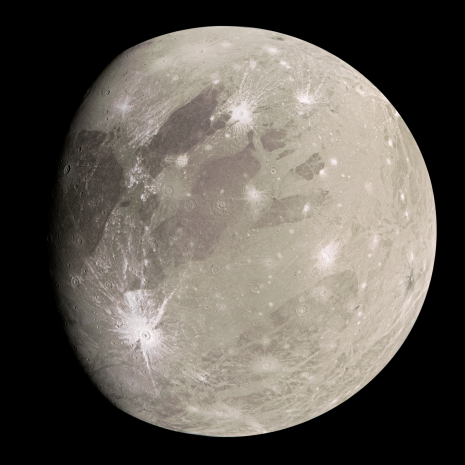 This water vapor forms when ice from the moon's surface sublimates — that is, turns from solid to gas.

Previous research has offered circumstantial evidence that Ganymede, the largest moon in the solar system, contains more water than all of Earth's oceans. However, temperatures there are so cold that water on the surface is frozen solid. Ganymede's ocean would reside roughly 100 miles below the crust; therefore, the water vapor would not represent the evaporation of this ocean.

Astronomers re-examined Hubble observations from the last two decades to find this evidence of water vapor.

The similarities in these UV observations were explained by the presence of molecular oxygen (O2). But some observed features did not match the expected emissions from a pure O2 atmosphere. At the same time, scientists concluded this discrepancy was likely related to higher concentrations of atomic oxygen (O).