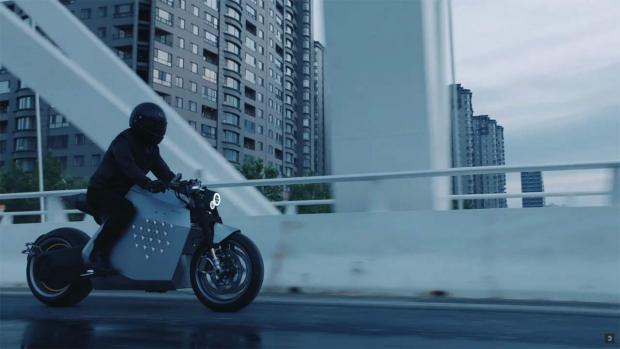 We've got ourselves a bit of a kitchen sinker here; Da Vinci has thrown all sorts of features at this one. But even some of the basic specs are a tad elusive. For starters, while it makes a peak of 135 horsepower, putting it very much in the "fast electric" category, the company says it runs "a smart control system that seamlessly integrates multiple different motors." Who the what now? Multiple motors? A separate press release then states it's actually 137 horsepower, running through a hub motor.

Peak torque is listed at a ludicrous 850 Nm (627 lb-ft), but then hub motors often have wild torque specs; witness the outrageous Verge TS, with a hub motor that doesn't even need a middle in it to break 1,000 Nm (738 lb-ft). The DC100 will sprint from 0-100 km/h in somewhere between 3-4 seconds, so crazy torque or no crazy torque, a well-ridden gixxer will still see it off at the lights.

Then there's the battery, a 17.7 kWh unit capable of 30-minute level 3 fast charging. That's a tad less battery than our old favorite, the Zero SR, in its latest model with a Power Tank kit in. At 18 kWh, the Zero offers 223 miles (359 km) of start-stop, slow-speed city riding, or just 112 miles (180 km) on the highway. Unless Da Vinci's managed a pretty impressive efficiency leap, we'd say a 250-mile range is highly optimistic.

In addition to a pretty full-color dash and lovely running gear from Brembo and Ohlins, this bike has plenty of electronic fruit in its bowl. Combined ABS braking and traction control for starters, but these are pretty standard. More interesting is the DC's "creep" feature, which starts the bike moving slowly forward when you release the brake lever – much like an automatic car. No playing drums on the tank at the lights, then.

If Truckers Like Me Won't Comply, Biden's Vaccine Mandate Could Tank The Economy

JIM STONE: LONG HAUL TRUCKERS will not comply with the MANDATE...