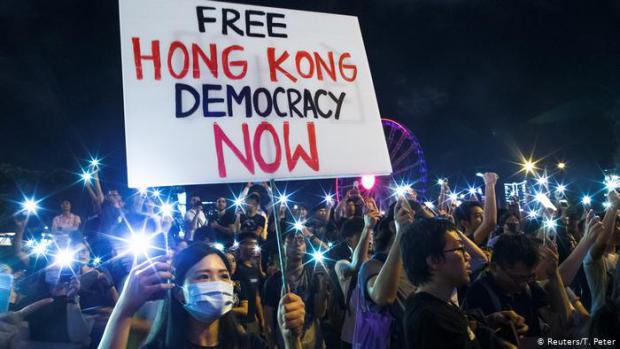 Tong Ying-kit has been convicted of inciting secession and terrorism for ramming his motorcycle into a crowd of police while flying the Hong Kong "Liberation" flag (which itself has been banned by the new national security law) during a protest last July. His flag carried a message: "Liberate Hong Kong Revolution in our Times".

The maximum penalty under the national security law is life in prison, and it's possible Tong could receive the maximum. The date of his sentencing hasn't yet been set, according to the BBC.

Tong was sentenced without a jury, departing from Hong Kong's longstanding tradition of holding jury trials in criminal cases. Hong Kong's secretary of justice (under the thumb of Beijing) rejected a request by Tong's defense team to bring in a jury, reportedly claiming that the trail could "put the jury in danger" given the political climate (after all, if they dared to acquit Tong, they might be the next ones to be arrested).

Justice Toh ruled that Tong was capable of understanding the flag and its "secessionist" meaning. Expressing "secessionist" sentiments is expressly forbidden by the national security law.

BBC's Grace Tsoi, who was present at the courthouse when the verdict was handed down, said dozens of journalists and advocates were there to observe the proceedings.

The verdict is the first hint at what might be in store for the dozens of other prisoners arrested due to their involvement in the protests, a group that includes Apple Daily founder Jimmy Lai and activist Joshua Wong.

"The conviction of Tong Ying-kit is a significant and ominous moment for human rights in Hong Kong," said a representative from Amnesty International.

"Today's verdict underlines the sobering fact that expressing certain political opinions in the city is now officially a crime, potentially punishable by life in jail."