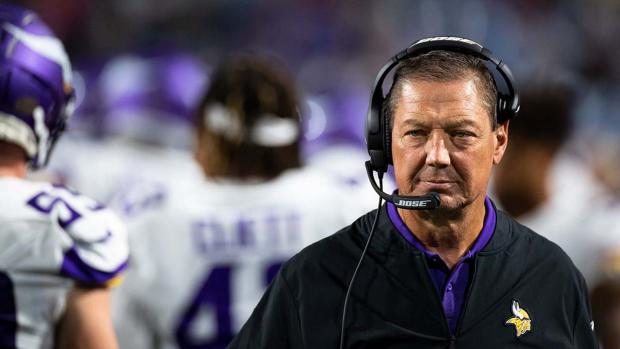 Minnesota Vikings assistant coach Rick Dennison will remain with the team in a new role despite his decision not to receive the COVID-19 vaccine, in violation of NFL rules.

The 63-year-old Dennison will serve as a senior offensive advisor to the team after reports recently surfaced falsely claiming he was leaving the Vikings over his decision to not be vaccinated.

The Vikings announced the reassignment on Tuesday, the day before their first full-team practice of training camp.

ESPN reported Friday that Dennison, an offensive line coach and running game coordinator, stepped down, becoming the first position coach to leave a team because of vaccine guidelines.

The team, however, told DailyMail.com that Dennison remained an employee.

Dennison was hired by the Vikings in 2019. This will be his 27th year on an NFL coaching staff.

'It was important we use him as a resource,' head coach Mike Zimmer said, 'but also give him a chance to work.'

Both Zimmer and general manager Rick Spielman declined to divulge Dennison's reason for not getting the COVID-19 vaccine, despite strict league-wide protocols for those without it. Zimmer said it's possible Dennison would get it later.