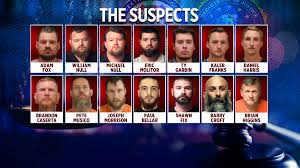 The narrative that domestic anti-government extremism is the greatest threat to U.S. national security — the official position of the U.S. security state and the Biden administration — received its most potent boost in October 2020, less than one month before the 2020 presidential election. That was when the F.B.I. and Michigan state officials announced the arrest of thirteen people on terrorism, conspiracy and weapons charges, with six of them accused of participating in a plot to kidnap Michigan's Democratic Governor Gretchen Whitmer, who had been a particular target of criticism from President Trump for her advocacy for harsh COVID lockdown measures.

The headlines that followed were dramatic and fear-inducing: "F.B.I. Says Michigan Anti-Government Group Plotted to Kidnap Gov. Gretchen Whitmer," announced The New York Times. That same night, ABC News began its broadcast this way: "Tonight, we take you into a hidden world, a place authorities say gave birth to a violent domestic terror plot in Michigan — foiled by the FBI."

Democrats and liberal journalists instantly seized on this storyline to spin a pre-election theme that was as extreme as it was predictable. Gov. Whitmer herself blamed Trump, claiming that the plotters "heard the president's words not as a rebuke but as a rallying cry — as a call to action." Rep. Maxine Waters (D-CA) claimed that "the president is a deranged lunatic and he's inspired white supremacists to violence, the latest of which was a plot to kidnap Gov. Whitmer," adding: "these groups have attempted to KILL many of us in recent years. They are following Trump's lead."