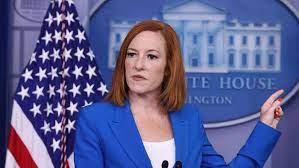 Doocy again was the only reporter in the White House gaggle to question the overlord's decree, grilling Press Secretary Jen Psaki, who again had no logical answer.

Psaki said it is "Because the public health leaders in our administration have made the determination based on data, that that is a way to make sure they are protected, their loved ones are protected and that's an extra step given the transmissibility of the virus."

In other words, Americans all have to wear masks again 'because we say so'.

There is no logic to the announcement, which is why several Republican governors quickly responded by saying they would not be enforcing the new rule.

"That's under consideration right now, but if you're not vaccinated you're not nearly as smart as I thought you were," Biden said.