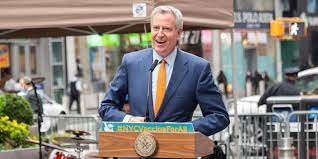 Just like clockwork, now that the CDC has ordered up another mask mandate, we're seeing cities revive their efforts to incentivize citizens to get the vaccine by offering perks like monetary handouts. To wit, NYC just announced that it will start giving out $100 to any New Yorker who gets their first COVID shot.

The details aren't exactly clear, but Mayor Bill de Blasio made the announcement during a Wednesday press briefing. The city recorded 929 new cases on average over the past week, almost 2x the level from the 439 cases reported on July 13, but still well below the levels from January and February.

Hospitalizations, which remain low, doubled to 108, compared with just 59 on July 13.

The mayor announced the initiative after the city failed to meet its vaccination goal for June. Only 54% of adults in the city are fully vaccinated.

The program starts Friday, according to a tweet from the mayor's office. The program will only be offered to those who get vaccinated at city-run sites.