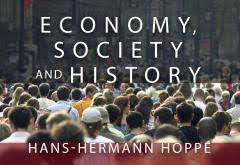 In June 2004, Professor Hans-Hermann Hoppe visited the Mises Institute to deliver an ambitious series of lectures titled Economy, Society, and History. What followed was an intellectual tour de force few academics would even attempt.

Over ten lectures, one each morning and afternoon for a week, Dr. Hoppe presented nothing short of a sweeping historical narrative and vision for a society rooted in markets and property. Delivered only from notes, to an audience of academics and intellectuals, the lectures showed astonishing depth and breadth.

Even the most jaded scholars in the room were blown away by the erudition and scholarship of Hoppe's presentation.

The result brought together the core of Hoppe's lifetime of theoretical work in one vital and cohesive series. Here we find provocative themes developed by Hoppe in the 1980s and 90s, particularly in his essays found in A Theory of Socialism and Capitalism and The Economics and Ethics of Private Property. We also find his devastating critique of democracy, made famous in his seminal book Democracy, the God that Failed.