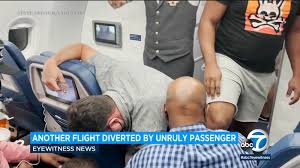 Why it matters: Travel is rebounding to pre-pandemic levels, but the pandemic is not over.

Like many other service sector workers, flight attendants are on the front lines of public interactions. As they now need to enforce mask mandates on top of regular safety procedures onboard, they're also feeling less safe doing their jobs.

By the numbers: More than 85% of 5,000 flight attendants surveyed between June 25 and July 14 said that they've had to deal with unruly passengers this year.

Close to 60% said they've had to deal with at least five incidents, while 17% said they experienced a physical incident.

Of the total surveyed, 84% said they experienced unruly behavior during flight.

What they're saying: "Incidents of unruly passengers on aircraft are up so high that if they continue at this rate, we may see more incidents in this one year alone than we've seen in the entire history of aviation," Sara Nelson, President of the Association of Flight Attendants-CWA, told reporters on a call Thursday.

Enforcing mask mandates and dealing with drunk passengers ranked among the top causes for escalated interactions.

Urination, throwing trash, punching back of seats, name-calling, and following staff off planes were cited as types of passenger abuse.