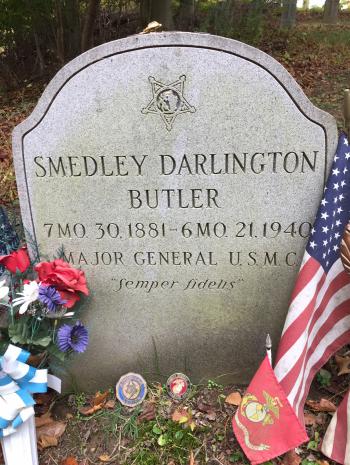 For the first thirty years of the twentieth century, when there was trouble on the peripheries of the emerging U.S. empire in the form of rebellions, bandits, or resistence, Washington could always rely on one soldier to restore order. Invariably, days after his appearance, newspapers nationwide would carry the identical headline, "The Marines arrived and everything is quiet."

So how did it happen that, after three decades as a reliable hatchetman, this soldier turned and took aim at the same military, financial, and political leaders whom he had served?

Smedley Darlington Butler was born 140 years ago to the day in West Chester, Pennsylvania, a descendent of the prominent Darlington family of Quakers and the son of Congressman Thomas S. Butler, future Chairman of the House Naval Affairs Committee. 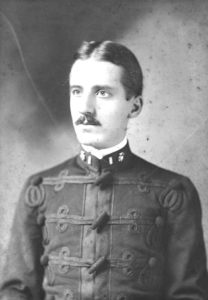 When the United States declared war on Spain in April 1898, the sixteen year old attempted to enlist and was denied because of his youth—his congressman father went so far as to have his name blacklisted among local recruiting stations. Bucking paternal coddling, Butler fled the coop and successfully enlisted in the Marine Corps as a Second Lieutenant by falsely giving the birthdate of his older brother.

The spotlight shone on him as soon as he landed at Guantanamo Bay. His reckless courage garnered the attention of Theodore Roosevelt, then commander of the Rough Riders in Cuba. The future president called the young Marine "the ideal American soldier," simply "the finest fighting man in the armed forces." Supporters would positively compare Smedley to TR for the rest of his life.

What followed in short order were deployments to the Philippines, China (where Butler was wounded during the Boxer Rebellion), and Honduras. Briefly returning stateside, he married Ethel C. Peters, the daughter of a wealthy railroad executive with whom he would have three children. Joined by his young bride, Butler would return to the Philippines before spending the turn of the decade leading a Marine battalion into battles in Panama and Nicaragua.

In 1914, during President Woodrow Wilson's intervention in the Mexican Civil War, Major Butler found himself stationed with a battleship squadron off the coast of Veracruz. In coordination with his commanding officer, Butler dawned civilian clothes and sneaked to shore. Once in Mexico City, the Marine posed as various alter egos (including a railroad employee, private investigator, and geologist), bluffing his way into inspecting Meixcan troop arrangements before returning to the fleet with vital information. If his disguise had been discovered at any time, he would have been promptly shot as a spy.