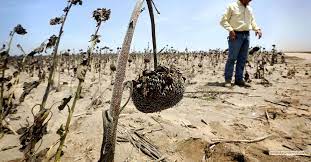 In addition to civil unrest and rising crime, we're now facing threats to our food supply in the form of drought, fire, and foreign ownership of our farmlands and food processing facilities. Whether it's meat or vegetables, potatoes or pasta, food is a huge issue. Food tensions have been the cause of many wars throughout history.

The U.S. is losing farms by the thousands yearly

Drought affects our ability to water our crops, whether in the garden or the farm field.

"If there is no water, there is no work. And for us farm workers, how are we going to support the family?" said 57-year-old Pablo Barrera, who was planting watermelons for Del Bosque. [source]

According to Farm Progress, the U.S. lost 4,400 farms in 2020 alone. Average family farm size has remained more or less stable, while Big Agriculture farms, such as CAFOs, have grown noticeably. BigAg tends to be hard on both animals and the environment. However, the U.S. has lost dairy farms at a shocking rate.

US Drought Meter (USDM), a weekly map shows both the geographic areas affected and drought intensity. As of July 27, the data shows nearly 1/3 of the United States is in the Extreme and Exceptional Drought categories, including all West Coast farm countries.

Drought is causing some farmers to walk away

"There is no universally accepted quantitative definition of drought. Droughts are instead usually described qualitatively as a deficit of water relative to normal conditions as referenced by water supply-demand and management." [source]

California, a state deep in extreme drought conditions, is the largest dairy-producing state in the Union. California is also the nation's top producer of vegetables, berries, and nuts. According to a piece published by Reuters, in anticipation of even further lack of water, farmers all across the state have left their fields unplanted. Others chose to plant drought-tolerant crops or turn to other forms of income.