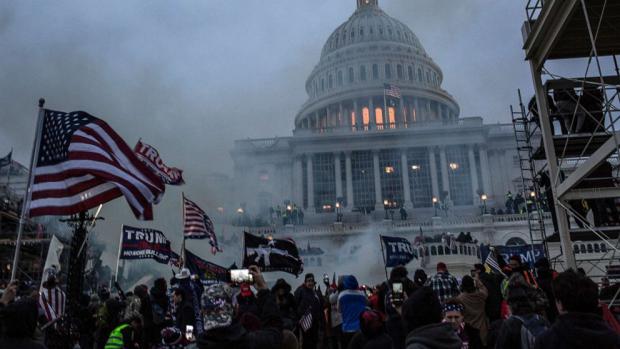 A fourth police officer who clashed with Capitol rioters on January 6 has killed himself.

Kyle DeFreytag, 26, died on July 10. He had responded to the Capitol insurrection on January 6th and had worked the later shift on that day. DeFreytag had been positioned outside the Capitol.

DeFreytag had been a Metropolitan Police Department officer for five years, according to his obituary.

DeFreytag had served in the city's 5th District. He was at the Capitol on the day of the rioting on a late shift serving to enforce curfew violations, Metropolitan Police confirmed to WUSA9.

'I am writing to share tragic news that Officer Kyle DeFreytag of the 5th District was found deceased last evening,' Chief Robert J. Contee III wrote in a message to the department in mid-July. 'This is incredibly hard news for us all, and for those that knew him best.'

The announcement of his death on Monday came just hours after it was revealed a third had officer taken his own life following the riots.

DC Metropolitan Officer Gunther Hashida, 43, died on July 29, his family announced in a GoFundMe account. He would have turned 44 this coming Thursday.

It's unclear how he killed himself and his family have not attributed his death to the riot on January 6. He leaves behind a wife and three children.

He'd worked at for the DC Metropolitan Police Department for 18 years.

Nancy Pelosi was among lawmakers who mourned him on Monday.

U.S. Capitol Police officer Howard Liebengood killed himself three days after the riot and DC Police Officer Jeffrey Smith shot himself on his way to work on January 15.

'On July 29, 2021, we lost Gunther Hashida, who leaves behind a loving wife, sister, 3 children, and a wonderful family,' his sister-in-law said in the description on his GoFundMe page.