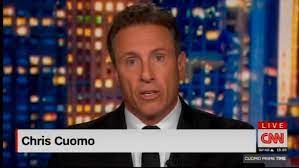 On Tuesday's broadcast of CNN's "Cuomo Primetime," host Chris Cuomo opened the show by ignoring the report on the sexual misconduct of his brother, New York Gov. Andrew Cuomo (D) while criticizing Florida and Texas and stating that vaccinated people have had "their rights to work and live as they want infringed upon, in significant part, because of those who have failed to do the same and help this virus change into what it is now, the Delta variant."

Cuomo began the show by saying, "We're focused on COVID here, especially until we get the Delta variant under control."

He continued by criticizing the coronavirus responses in Florida and Texas.

After turning to New York City's vaccine requirements, Cuomo stated, "The vaccinated are the victims, and remember who the vaccinated are. We talk about the unvaccinated all the time, and rightly so, but remember, this is about the tyranny of a minority. The majority of this country, people from left and right and center and north and south, all places, all faces, the majority have taken the step to protect themselves and others. …