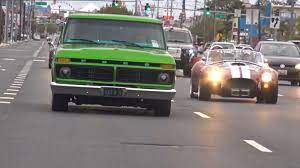 It might have caused a ruckus to propose a law outlawing older vehicle without Onboard Diagnostic (OBD II) electronic data collection ports, GPS transponders or some other, similar means by which a vehicle can be externally tracked – using the pretext of keeping track of its mileage that way, so as to tax its owner that way. This being bad enough all by itself, being invasive enough all by itself. Instead of paying gas taxes anonymously at the pump whenever you fill up – possibly with cash – the federal government will tax you automatically and electronically by the mile, wherever you drive.

Which will also give the government – and the insurance mafia, which is also effectively the government, just ex officio but endowed with governmental power to make you do things or else – the power to monitor how you drive, since the same OBD data port/GPS that will be used to keep track of mileage can also keep track of how fast you drive as well as where and when you drive.

Everything about your drive will, in other words, be known unto them.

That is one of the many treasures hidden within the just-passed – by enabling Republicans, who provided the necessary support for the Democrats who confected it – "Infrastructure" bill. Which only has about 20 percent to do with building new roads and bridges or fixing the ones that exist and 80 percent to do with funding various projects that almost no one wishes to fund voluntarily, as by paying for them willingly. Things like Amtrack and related forms of government-controlled herd transit. Also "green" things such as electric car charging stands and of course electric cars, themselves that cost plenty of green – all of it to be extorted from the public that would otherwise never freely pay the cost of it.

Hence the need to fleece and force them to.

But the real thanks are due to the Democrats who identity as Republicans that made it so. The ones who voted for the above, which also includes the pre-crime conviction of every American who drives – who is henceforth to be considered presumptively drunk and – as was once done to convicted drunk drivers – not allowed to drive until his car determines that he has not been drinking. Even if he doesn't drink. Even though he has never been so much as accused of ever having driven "drunk."

All new cars will be fitted – at our expense – with some kind of alcohol detection technology functionally the same as the equipment courts sometimes order convicted DWI offenders to have installed in their cars that prevent the car from being driven if they sense the driver has been drinking. The difference being no conviction will be the prelude to this degradation of all American drivers, commencing just as soon as the new regulations can be articulated.

Which brings us to the way they'll regulate older, pre-OBD and GPS and similar follow-you-around technology cars off the road under the pretext of taxing by the mile: