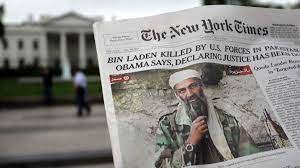 A decade ago today, I posted the translation reproduced below of a TV news report in Pakistan about the alleged killing of Osama bin Laden by a strike team of Navy SEALS sent in by Obama.  I had previously posted a video of the news report which had subscripts explaining in English what was being said, but not myself familiar with the language as a check on the veracity of the subscripts I had the news report translated by a qualified person.  What is reproduced below is my column of August 7, 2011.

But first permit me to briefly recap the story.  The Obama regime made a dramatic announcement that a Navy SEAL team had just killed Osama bin Laden in Pakistan.  The dramatic announcement was accompanied by the claim that Obama and top officials of his regime had watched the operation live.  This news report was complete with a photo of Obama and his team intently watching a TV screen while Obama was being terminated.

The claim that the WH watched the raid and death of bin Laden was quickly abandoned as obviously the visual evidence would have been recorded, and everyone would be asking to see the non-existent visual evidence.

Pakistan TV reporters descended on the scene in Abbottabad, Pakistan, and made discoveries that totally contradicted the White House claim.  No one had ever seen bin Laden, and the compound the Americans said he lived in was lived in by different people known to the community.

IT'S HAPPENING: They're Actually Scared Now!