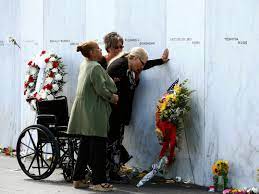 Relatives believe the information will prove the Saudi government was complicit in the attacks – while newly available files have already raised questions about Langley's involvement.

Family members of 9/11 victims have warned Joe Biden to stay away from the upcoming 20th anniversary memorial events, unless officials are willing to declassify documents that the relatives believe will prove the Saudi Arabian government was involved in the attacks.

"There is simply no reason – unmerited claims of 'national security' or otherwise – to keep this information secret," an open letter, signed by 1,700 people directly affected by the incident, stated.

Allegations of Riyadh's involvement in the tragedy have long abounded, not least because 15 of the 19 hijackers were Saudi citizens. The highly controversial 9/11 Commission Report of 2004 found no evidence "the Saudi government as an institution or senior Saudi officials individually" funded Al-Qaeda, but did identify Saudi individuals and organizations as Al-Qaeda's primary funding source. Two commission co-chairs, Thomas Kean and Lee Hamilton, have since asserted that the investigation was "set up to fail."