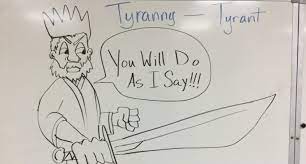 There are many schools of thought on why and how tyranny rises in any given society and all of them miss the mark in terms of explanations, primarily because they all allow their biases to rule their conclusions and blind them to the deeper aspects of power and conspiracy. In other words, they are willing to go down the rabbit hole only so far, and then they deny that the rabbit hole even exists.

The common assumption when it comes to autocracy or oligarchy is that people are "stupid" and easily manipulated into following compelling personalities that make promises they never intend to keep. This is a foolish oversimplification. In truth, the level of manipulation needed to lure a majority of people into dictatorship is so complex that it requires an advanced understanding of human psychology.

In our modern era, people cannot merely be ordered to submit at gunpoint, at least not right away. They must be tricked into conforming, and not only that, but they must be made to think that it was THEIR IDEA all along. Without this dynamic of self censorship and self enslavement, the population will eventually rebel no matter how oppressive the regime. A thousand year tyranny cannot exist unless a number of people are conned into applauding it, or, they directly benefit from it.

And this is where we find the true key to totalitarianism – It only thrives because there is an inherent portion of any given society that secretly loves it and wants it to exist.

It Takes A Lot Of Education To Keep Us This Stupid

Bitcoin & The US Fiscal Reckoning

The CIA Has Stultified American Consciences

Covid Authoritarians Are The Cause Of America's Problems, Not The Unvaccinated