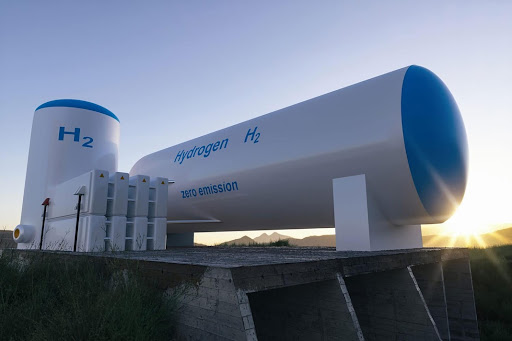 As it grows, you're going to start hearing more about colors. Black hydrogen is produced through coal gasification. Grey comes from reforming natural gas. Brown is made by partially oxidizing lignite, or brown coal, under high pressure. Currently, 96 percent of H2 production falls under these dirty categories.

Green, of course, is hydrogen produced from clean, renewable sources, typically through electrolysis. That's the ultimate goal here, but the economics are not currently favorable. As in many areas, the dirty stuff is cheaper. Green hydrogen will eventually reach and even beat cost parity, but that's going to take a lot of time and investment.

During that time, one "lower emissions" alternative being proffered is "blue hydrogen." This is grey hydrogen produced through steam reforming of methane, but with an extra step of carbon capture and storage added to suck up emissions from the reforming stage.

A relatively new concept, it's currently only being produced at two facilities at commercial scale: a Shell factory in Canada and another in Texas operated by Air Products.

But a new report from researchers at Cornell and Stanford Universities warns that blue hydrogen is a terrible intermediate step, with hidden "fugitive emissions" involved that make it actively worse for the atmosphere in certain applications than legacy options like burning coal.

Speaking specifically about using hydrogen to create heat – such as in home heating, cooking or when burned in power generators originally designed to run on natural gas, the report states in no uncertain terms, "Perhaps surprisingly, the greenhouse gas footprint of blue hydrogen is more than 20 percent greater than burning natural gas or coal for heat and some 60 percent greater than burning diesel oil for heat, again with our default assumptions."

500 scientists tell UN there is no climate emergency.