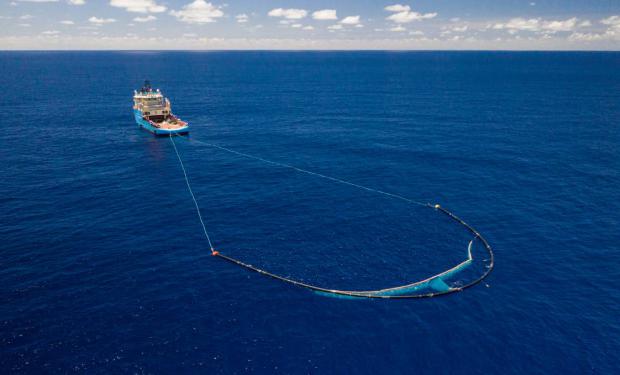 The latest might be the most significant one yet, with the team switching from a passive design that relied on the forces of the ocean to one powered by active propulsion, which they see as a far more efficient way forward.

Originally, the idea behind the Ocean Cleanup Project's system was to anchor a massive U-shaped floating barrier to the seabed, which would take advantage of the ocean's currents to collect plastic waste as it was carried into the area. Later versions took a free-floating approach and were powered by the currents, waves and wind, creating a speed differential with the plastic waste that enabled it to be scooped up as the barrier moved through the water.

However, testing of this approach out in the Great Pacific Garbage Patch showed that the design wasn't quite up to the job, with the system struggling to maintain the necessary speeds to gather up the trash. So the team hauled the system in and made some upgrades, the most notable of which was a huge parachute designed to slow down the barrier and maintain a steady speed, so the faster-moving plastic could drift into the opening and stay there.

The team has now abandoned the idea of a passive system in favor of one powered by active propulsion, with crewed vessels at either point of the U-shaped barrier towing it through the water at a steady speed of 1.5 knots. The idea is to funnel the collected plastic into a retention zone at the far end, and one benefit of having it towed by crewed vessels is that it can be steered towards areas of high waste concentration. Another benefit of this design, according to the Ocean Cleanup Project, is that it will be more commercially viable to scale up.

Called Jenny, this design features an 800-meter-long (2,640-ft) barrier and is described as the Ocean Cleanup Project's first large-scale system. It was deployed in the Great Pacific Garbage Patch for the first time this week and will undergo more than 70 separate tests over the coming 60 weeks. Through these tests, the team plans to not just validate the design, but demonstrate it has limited environmental impact and no safety issues, while also collecting a significant amount of plastic.