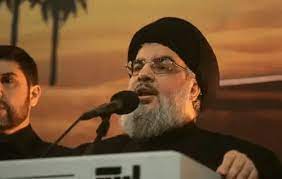 Commenting on the explosion in Akkar, Nasrallah said that "what happened in Akkar imposes itself on all of us," describing it as "sad news for everyone who heard it in Lebanon or abroad."

The Hezbollah leader sent his condolences to the people of Akkar, stating that "the lesson must be taken from what happened to prevent its recurrence in other places," stressing that "the incident must constitute a decisive factor for those concerned in order to form a government."

Nasrallah stated that "a government must be formed as soon as possible, noting that what happened today in Akkar in the town of al-Talil imposes itself on everyone."

Regarding the lifting of fuel subsidies, Nasrallah said, "The solution is not in sharing responsibility, but in forming a government, and that there are many Lebanese partners responsible," pointing out that "most companies monopolize hydrocarbons, and are working to store them to sell on the black market."

He said, "I confirm that we will definitely bring diesel and gasoline from Iran, and in the next two days I will inform you when," The Hezbollah leader further emphasized that "whoever stored and sold fuel on the black market betrayed the trust."