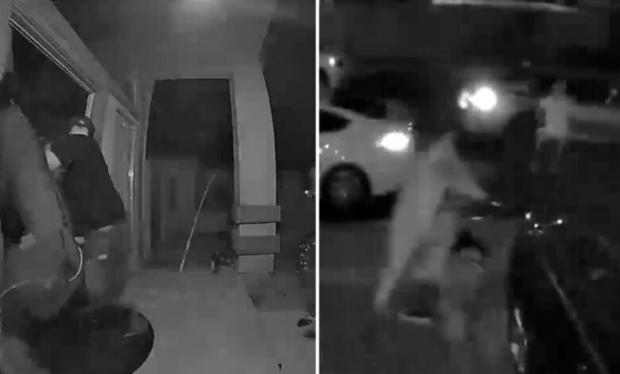 None of the four appeared to have been injured, and footage showed them immediately fleeing the scene, the Phoenix Police Department said according to Fox News.

The incident occurred just before 4am August 12, when four men, their faces covered with bandanas, were caught on video getting out of a gray sedan and approaching the residence.

The footage then shows two of the men as they make their way to the front door.

One notices the camera and attempts to obscure it, but quickly abandons the idea as the other three get into position.

Two of the masked men then simultaneously kick the front door down, but the moment they do, they are met with immediate gunfire from inside the house.

A different camera angle from another home down the street shows the four men run off in terror toward a slowly moving getaway car. Two eventually get in and flee, while the other two can be seen running away on foot.

A Phoenix police spokesperson told DailyMail.com that no arrests have been made as of Saturday, and the department is looking for the four men on the video.

Anyone who recognizes the suspects or has information on the crime can provide it anonymously at 480-WITNESS.