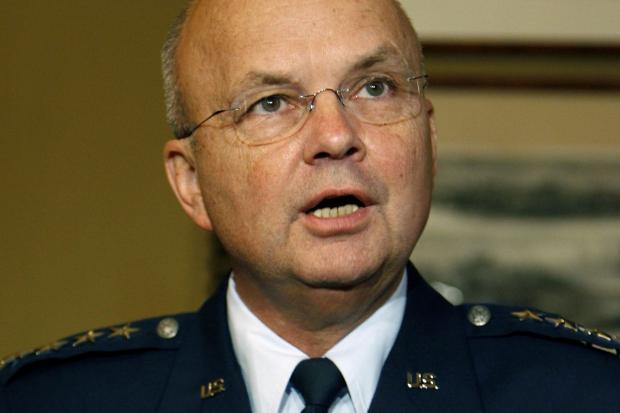 A retired top US military general and former CIA chief sparked outrage over the weekend by comparing supporters of former President Donald Trump to the Taliban and calling a suggestion to send 'the MAGA wearing unvaxxed' to Afghanistan a 'good idea.'

Retired four-star Air Force General Michael Hayden on Thursday retweeted a split image of armed militants in a caravan of white pickup trucks with the caption 'Their Taliban.' Under that was a picture of cars adorned with Trump 2020 and American flags along a highway.

The second image was captioned 'Our Taliban.'

On Sunday morning Hayden took another swing at the former president's fans.

Twitter user JoeyG suggested 'Can we send the MAGA wearing unvaxxed to Afghanistan, no use sending that plane back empty?' in apparent reference to the US's evacuation of American nationals and desperate Afghan civilians and translators escaping the Taliban.

'Sad and unbecoming even from you, Mike,' replied GOP Rep. Jim Banks of Indiana, a combat veteran who supported Trump's efforts to cast doubt on the election.

While he didn't respond directly, Hayden retweeted another user responding to Banks, 'Mr. Banks, General Hayden doesn't need to hear from you.'