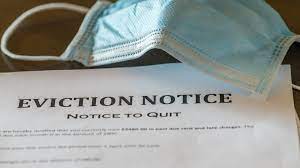 The Centers for Disease Control and Prevention (CDC) extended the moratorium earlier this month after President Joe Biden acknowledged doing so would be illegal and after Congress opted not to extend it.

CDC Director Dr. Rochelle Walensky signed an order on Aug. 3 determining that allowing tenants to be evicted for failing to make rent or housing payments could harm public health control measures aimed at slowing the spread of the CCP virus, also known as SARS-CoV-2, which causes the disease COVID-19. The order will expire on Oct. 3.

"The emergence of the delta variant has led to a rapid acceleration of community transmission in the United States, putting more Americans at increased risk, especially if they are unvaccinated," Walensky said in a statement at the time.

"This moratorium is the right thing to do to keep people in their homes and out of congregate settings where COVID-19 spreads. It is imperative that public health authorities act quickly to mitigate such an increase of evictions, which could increase the likelihood of new spikes in SARS-CoV-2 transmission. Such mass evictions and the attendant public health consequences would be very difficult to reverse."

The extension also came after Supreme Court Justice Brett Kavanaugh acknowledged on June 29 in a statement about the case Alabama Association of Realtors v. Department of Health and Human Services that the CDC "exceeded its existing statutory authority by issuing a nationwide eviction moratorium."