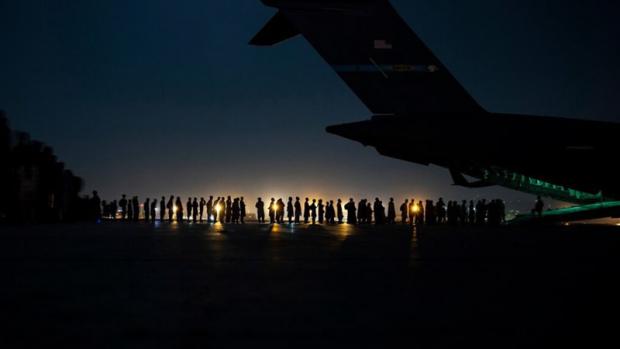 For only the third time in history, the Pentagon Orders Airlines to Assist in a Military Operation.

Airlines began positioning aircraft to comply with a Pentagon order, announced Sunday morning under a rarely invoked law, which compelled six airlines to contribute 18 planes to help with the evacuation. The first flights carrying evacuees were expected Monday. Officials said the commercial aircraft wouldn't fly in and out of Kabul but would ferry evacuees to the U.S. from bases in Germany, Qatar and Bahrain to ease transport bottlenecks.

The airlift is now entering a critical phase, ramping up after days of mayhem at Kabul airport that stunned the world and dealt a serious blow to the Biden administration, which had predicted an orderly withdrawal only to see the Taliban seize Afghanistan's capital in days. U.S. forces have strained to protect the airport and increase the number of departing flights ahead of Mr. Biden's Aug. 31 deadline for the U.S. to exit from the country. On Sunday, Mr. Biden said discussions were under way among U.S. officials about extending the deadline.

The Pentagon's orders to the commercial airlines marked only the third time in 70 years that such a step has been taken. The Pentagon requested aircraft from six airlines for a period of approximately one to two weeks, defense officials said.