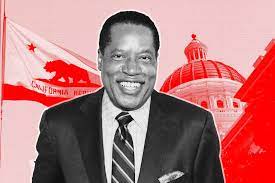 Now Mr. Elder, a Los Angeles Republican who bills himself as "the sage from South Central," could end up as the next governor of the nation's most populous state. As the campaign to recall Gov. Gavin Newsom has become a dead heat among likely voters, Mr. Elder has emerged almost overnight as the front-runner in the campaign to replace him.

Fueled by a combination of arcane recall rules, name recognition and partisan desperation, his rise to the top of a pack of some four dozen challengers has stunned and unnerved many in both parties.

Democrats call him the agent of a far-right power grab. Republican rivals say he is an inexperienced, debate-dodging opportunist. Orrin Heatlie, the retired sheriff's sergeant who is the recall's lead proponent, said he and his fellow activists were voting for someone else.

This month, The Sacramento Bee and two Republican candidates — Kevin Faulconer, the former San Diego mayor, and Caitlyn Jenner, the television personality and former Olympian — demanded that Mr. Elder drop out of the race after an ex-girlfriend of his said he brandished a gun at her while high on marijuana during a 2015 breakup.

"We were having a conversation and he walked to the drawer and took out a .45 and checked to see that it was loaded," Alexandra Datig, 51, said in an interview. Ms. Datig, who worked as an escort in the 1990s and now runs Front Page Index, a conservative website, said: "He wanted me to know he was ready to be very threatening to me. He's a talented entertainer, but he shouldn't be governor."