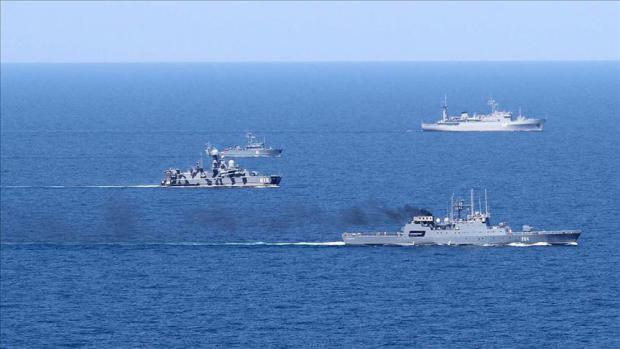 The timing of a Russian announcement detailing upcoming joint military exercises appears geared toward sending just such a message.

"Russia, Iran and China will hold joint maritime exercises in the Persian Gulf around late 2021 or early 2022, Russia's ambassador to Tehran said, the RIA news agency reported on Monday," according to Reuters.

It's been no secret that the Russian and Chinese militaries have grown closer over the past years, but rarer still are major drills involving the superpowers plus Iran, and centered in the Persian Gulf - site of recent soaring tensions which lately included Iranian commandos briefly seizing a foreign tanker, as well as the drone attack of the Israeli-managed 'Mercer Street' tanker off the coast of Oman on July 30.

Russia's ambassador to Tehran, Levan Jagaryan, confirmed the games in Monday statements, saying "Russian, Iranian and Chinese warships are taking part in it." He added, "The main aim is to practice actions on ensuring international shipping safety, and combating sea pirates."

The Russian official also addressed the recent tanker incidents of this summer: "There are tensions indeed, especially following the tanker incidents in the Persian Gulf and the Gulf of Oman, but I would not be dramatic and say that the situation is more acute now than during previous crises. Neither Iran nor its Arab neighbors are interested in further escalation."

The Islamic Republic has of late seen growing military ties with Russia, given also just last month Iran sent a pair of warships all the way to Saint Petersburg to participate in a major naval parade at the invitation of Russia.

Putin Warns of League of Nations Revival: What Are the Implications?

Russia Will Allow Israel to Attack Syria With Impunity