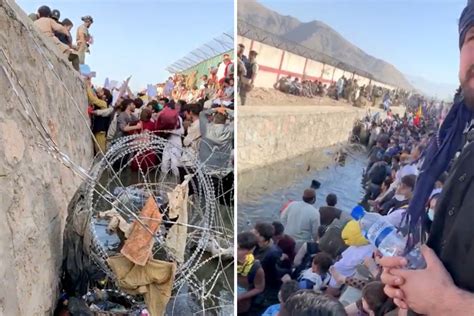 Sometimes their panicking mothers and fathers will spot them, and these tiny figures will be passed back above the heads of the crowds for an emotional family reunion. But not all are so lucky.

All around you see harrowing, hand-made posters begging for information about missing sons and daughters who could be anywhere in the stinking, rubbish-strewn approach road which is still filled with thousands of people desperately hoping they might be allowed into the airport and on a flight to sanctuary.

Bad as it is, it's not the outright mayhem it was a few days ago when people were crushed to death and I witnessed bodies covered in white sheets being carried from the crowd.

In part, this is because of the brutal crowd-control techniques used by the Taliban fighters, who now preside over the scene from the tops of the sea containers the paras have installed to create a screening barrier.

Seeing them standing alongside British troops is surreal, but containing the crowds is vital here and clearing up this evacuation mess requires some lateral thinking in working with the 'enemy'.

After 20 years of fighting, this is a culture shock for both sides; but a reminder of what the Taliban are capable of comes with their vicious beating of anyone who defies their orders.

Insider Trading… Why Politicians Can Do it and You Can't