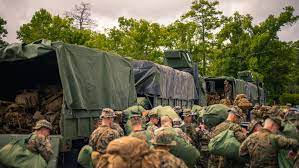 In an effort reestablished under the 2010 earthquake response moniker "Joint Task-Force Haiti," a detachment of roughly 200 Marines departed Camp Lejeune, North Carolina for Haiti on Wednesday. The detachment is supported by 420 sailors and several ships and aircraft from the U.S. Navy and Coast Guard.

The Marines' mission is to provide security for Joint Task-Force Haiti, who will work to "help find stranded survivors from the disaster, deliver medical supplies, and provide direct medical assistance."

The Marines will join other U.S. forces already deployed to Haiti, which include U.S. Navy P-8 Poseidon aircraft, "a 14-person situational awareness team from Special Operations Command South [stationed at] the U.S. Embassy[,]" and the USNS Burlington, a fast transport vessel.

Also deployed are "eight helicopters–three UH-60 Black Hawks, three CH-47 Chinooks, and two HH-60 Pave Hawks from Joint Task Force-Bravo in Honduras–to provide medical air support. Four of those helicopters have been tasked with moving a [] surgical hospital to Les Cayes, per the request of USAID."

Other forces include the USS Arlington, an amphibious transport dock equipped with a surgical team and landing craft capabilities, and a number of Coast Guard assets including three H-60 Jayhawk helicopters and several cutters.

And yes, these forces will be equipped with plenty of COVID-19 vaccines for Haiti, a country which, until Moïse's assassination, remained largely free of the Global North's COVID-19 response.