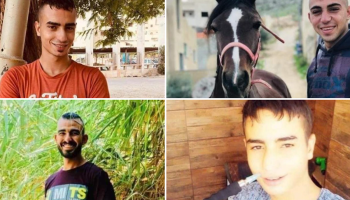 The four Palestinians – Saleh Mohammed Ammar, 19, Raed Ziad Abu Seif, 21, Nour Jarrar, 19, and Amjad Hussainiya, 20 – were either newly born or mere toddlers when the Israeli army invaded Jenin in April 2002. The objective, then, based on statements by Israeli officials and army generals, was to teach Jenin a lesson, one they hoped would be understood by other resisting Palestinian areas throughout the occupied West Bank.

In my book, Searching Jenin, published a few months after what is now known as the "Massacre of Jenin" or the "Battle of Jenin", I tried to convey the revolutionary spirit of this place. Although, in some ways, the camp was a representation of the wider Palestinian struggle, in other aspects it was a unique phenomenon, deserving of a thorough analysis and understanding.

By the end of that battle, Israel seemed to have entirely eliminated the armed resistance of Jenin. Hundreds of fighters and civilians were killed and wounded, hundreds more arrested and numerous homes destroyed. Even voices sympathetic to the Palestinian struggle have underestimated Jenin's ability to resurrect its resistance under seemingly impossible circumstances.