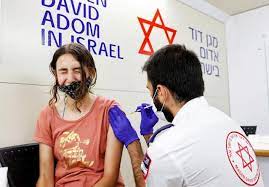 Despite their success in getting their population to have experimental drugs injected into their bodies, the country is suffering through a huge spike in cases. Tuesday had nearly the highest new case total the nation has seen since the pandemic began.

There have been plenty of reasons given for this. Some point to Israel opening up and letting people take off their masks for a short time.

Others say it's normal for there to be occasional spikes following mass vaccinations, ignoring literally every successful vaccine in world history. Then, there are those who are trying to move the goalpost, blaming the Delta Variant for forcing us to accept that the vaccine are more of a deterrent than protection.

One particularly clueless news anchor compared the vaccines to watches, saying "Some watches are waterproof while others are water-resistant." She seemed to feel smart after revealing her analogy.

What you won't hear anyone in government, mainstream media, academia, or Big Tech tell us is the only logical conclusion: The "vaccines" aren't working.

An article at The Daily Beast discussed the circumstances in Israel. As mandated by the powers-that-be, they swayed the sentiment of the article towards promoting the vaccines despite the facts on the ground. But, as Israel's coronavirus czar Dr. Salman Zarka said, "Unfortunately, the numbers don't lie."