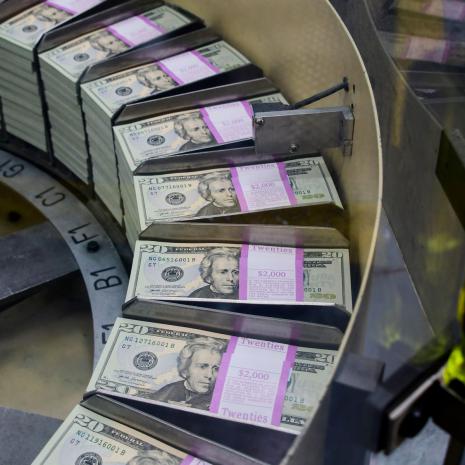 Hemke contends, "The Chinese, four months in a row, have been net sellers of Treasuries...They're not buying them.  Well, somebody has got to buy..."

"  Congress just announced this week that they came to a deal where they are going to spend $4.1 trillion on what is allegedly called infrastructure. . . . The money has got to come from somewhere. There is this notion that they are just going to raise taxes on rich people.  Rich people are just going to change how they spend and do their taxes.  Who is going to loan us money?  It's not going to be the Chinese or other foreign countries because they don't have confidence in us anymore.

So, the money is going to come from somewhere.  Of course, the Fed is going to keep monetizing the debt because if they don't, interest rates have got to rise to a point people are willing to loan it to the U.S.  If interest rates go to 3% or 5%, the whole thing blows up."

Hemke points out, "All we can do is prepare for a time when this finally implodes because it will..."

Econ 101 teaches you if you are increasing supply (of dollars) and decreasing the demand, the price falls and the dollar collapses.  Inflation spins out of control.  Then, you have to do all these other things to try to keep interest rates from going up.  All the plates start to collapse that Fed Head Powell is trying to spin."

Meet the Biden Nominee Who's Sympathetic to Soviet-Era Socialism--