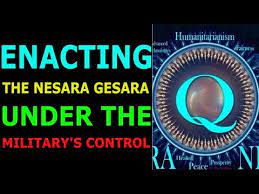 President Clinton signed NESARA into law on October 10, 2000. At that point NESARA, as with any legislation so acted upon, became a "law of the land", but wait a minute! No one wanted to enforce it. Why? No one wanted to enforce NESARA because this law required the physical and permanent removal from their government positions of all those, who were treasonous. Those, who had deliberately acted outside the Constitution of the Republic, had committed treason. Those who were treasonous included the United States president and vice president, the presidential cabinet, all members of Congress, various government departmental heads, all fifty governors of the fifty states, judges and others.