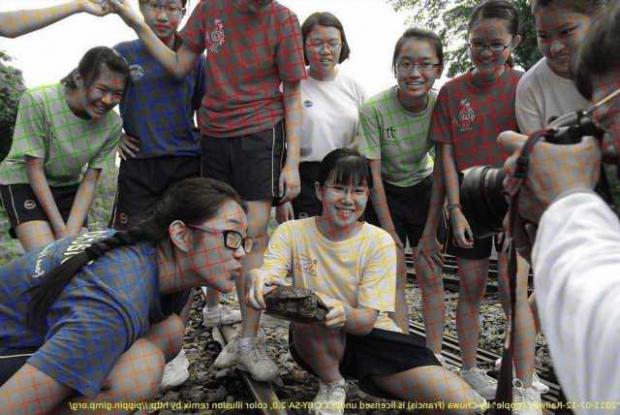 This picture looks like any other colour photo when you first look at it but it's actually an optical illusion, because it's in black and white.

London-based digital artist Stuart Humphryes has gone viral after sharing the picture with his followers on Twitter, which demonstrates a 'colour assimilation grid illusion'.

The brain relays the information it gets from the lines of colours and applies it to the rest of the picture.

People were mind-blown and many said they wouldn't have noticed it was actually a greyscale picture if they hadn't taken a second look.

The picture shows a group of teenagers in China posing for a picture.

It appears that some of them are wearing blue t-shirts, while two are wearing green, one yellow, and another pair, red t-shirts.

The leaves of the tree in the background also appear to be green.

But in fact, a closer inspection finds the picture is greyscale, with thin lines of colours overlaid on the picture.

So what a person sees is not a teenager wearing a green t-shirt. It is a greyscale picture of a teenager, with green lines above their t-shirt.