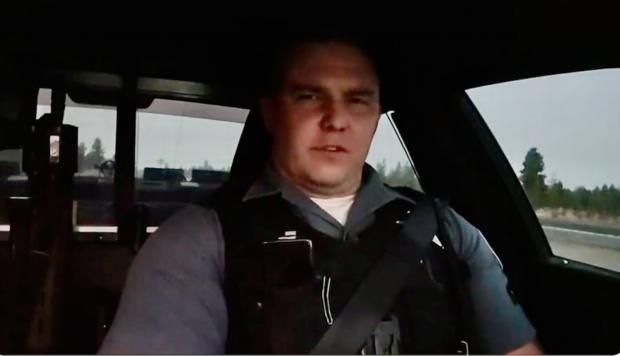 Oregon State Trooper, 29-year-old Zachary Kowing, has been placed on paid leave after taking a video of himself inside his patrol car and explaining why he will not enforce or abide by Democrat Governor Kate Brown's discriminatory vaccine mandate.

In his video, the young state trooper explained that he understands the risks of speaking out and that he would "likely get fired" over making the video but said he is "nonetheless exercising my First Amendment Right to speak freely."

"Miss governor, I think you've forgotten that you were elected by the people; therefore, you work for the people. The title governor does not give free rein to force medical decisions upon us," Officer Kowing said.

"I swore an oath to uphold the Constitution of the United States, to protect the freedom of the people who pay my salary, the 8-year veteran explained as he sat in his patrol vehicle. "I do not work for my governor but for them."

"I have personal and religious reasons as to why I will not take the vaccine, as well as the freedom to choose not to," he says. "I'll likely get fired over this video, but I'm nonetheless exercising my First Amendment rights to speak freely."

Editor's Note: The video on Hal Turner's site is no longer there.