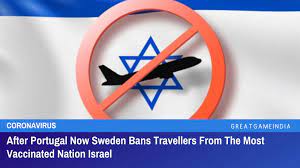 Sweden became the second European Union country to ban Israeli residents from entry due to a rise in COVID-19 cases in Israel, despite the country being one of the most vaccinated countries in the world.

Portugal on Wednesday became the first EU country to ban travel from Israel due to a rise in cases. Both countries are following the EU's recommendation to remove Israel from its list of green countries.

Interior Minister Mikael Damberg told news outlets that the sharp increases in COVID-19 cases in Israel, the United States, and other countries are the reason why they were removed from Sweden's travel ban exemption. Despite Israel's mass vaccination campaign, the virus has continued to spread, Damberg said.