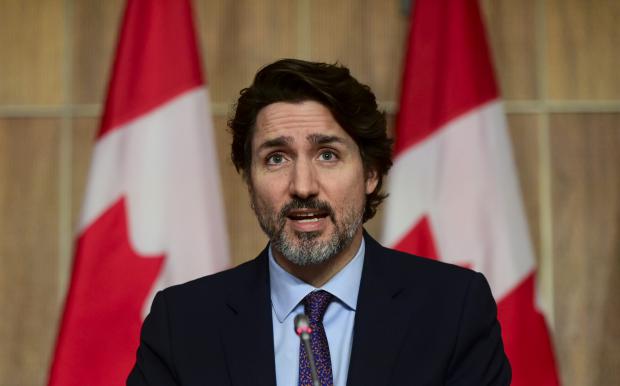 The incident occurred while Trudeau was boarding his campaign bus after an event at a brewery in London, Ontario, a city some 120 miles southwest of Toronto. Videos posted to social media of the episode show protesters throwing gravel in the direction of the prime minister and some of the reporters traveling with him. Trudeau turned toward the direction the gravel was coming from and boarded the bus.

Speaking to reporters on a Liberal campaign plane, Trudeau said that some of the projectiles "might have" hit his shoulder, comparing it to when a woman threw pumpkin seeds at him in 2016.

"There was little bits of gravel," he told reporters, seeking to dismiss the incident. "It's no big deal."

It was the latest ugly scene in a 36-day federal election campaign that has not been short of them. Vandals have defaced candidate lawn signs with antisemitic graffiti. Candidates of all political stripes have reported being targeted with sexist and racist slurs.

Trudeau last month called a snap federal election for Sept. 20, betting that his handling of the public health and economic crises wrought by the pandemic would help him to regain a majority in the House of Commons. With under two weeks before the vote, his Liberals are running neck-and-neck with the Conservatives.

From the early days of the campaign, Trudeau has sought to position vaccine mandates as a wedge issue. Polls show that Canadians overwhelmingly support such measures.