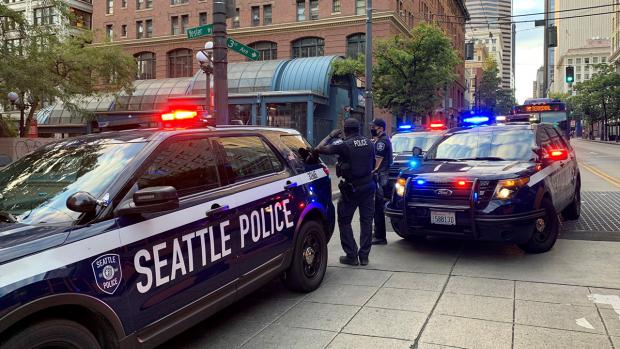 More than 200 Seattle police officers could lose their jobs over the city's COVID-19 vaccine mandate because they have either not received the shot or refuse to hand over their medical data to bosses, according to reports.

The department is still reeling from a 17% budget cut following a push by leftist activists to defund the police last year - with nearly 300 cops already quitting since the start of 2020.

Washington Governor Jay Inslee announced last month that most state employees will be required to get vaccinated by October 18 or face 'non-disciplinary dismissal'.

But the move could see the number of cops in Seattle slashed - despite staffing at the department already at lows not seen since the 1980s.

Just over 200 cops have either said they are not vaccinated, or have refused to turn over their data to bosses,  according to KKTH's conservative host Jason Rantz.

That represents about 20 percent of the department's 1,080 deployable officers, who have to look over a population of more than 724,000 people.

In July, it was revealed that the department had already lost at least 280 officers due to what they called an 'anti-police climate' in the city amid Black Lives Matter protests and calls to defund the police.

A record 180 officers 'separated' from the department last year - nearly double the 92 that left in 2019. The numbers take resignations, retirement and dismissals into account.